The gathering of friends on a  Friday night is an all-American tradition. Whether it’s for a night out or a cozy get together inside, the goal is to make the night exciting. Why not battle evil as mythical heroes of old or save the king’s kingdom from evil necromancers as a mighty knight.

You may be a bit confused about how you’ll be able to do all this. After all, necromancers don’t wander the streets looking for kingdoms to overthrow.  But, by immersing yourself in an RPG, you could be devising a plan to defeat evil.

You may be asking yourself, what’s an RPG? Well, an RPG is a Role-Playing Game. You and a few friends each assume a role dictated by the game; you must think and act like the role you’re playing.

By obeying the rules, immersing yourself into the task, customizing your character, and developing the storyline, you and your pals are guaranteed a night to remember.

Below we’ve created a list of the ten most exciting RPG board games currently on the market. Buckle up and get ready, we hope this list gives you a good idea for your next game night.

This post contains some affiliate links. If you click through and make a purchase, I’ll earn a commission, at no additional cost to you.

Gloomhaven is an all-encompassing game that draws upon some of the more exciting elements of the RPG experience. You and your friends assume the roles of adventurers in an unknown land. Upon choosing your character, you can customize the abilities to your liking, giving you full control of their destiny.

Allowing up to 4 players at a time, Gloomhaven plunges you into an unknown world begging to get explored. Through patient deliberation, tactical planning, and a bit of deductive reasoning, you can choose your adventure exploring ominous ruins and looting villages, all the while increasing the experience and abilities of your character.

With close to 90 different scenarios fueled by the individual decisions of each player, Gloomhaven makes our list with ease. An ever-changing environment guarantees hours of fun, even over multiple gaming sessions. The choice is yours, choose who you will become.

Ever wondered what it feels like to battle against an Overlord in an all-out battle to the death?  Well, Descent Journeys in the Dark Second Edition allows you to do just that.

Descent Journeys in the Dark Second Edition
Buy on Amazon

Nothing says fun, like wandering through a dark, dreary dungeon while battling hideous monsters, a perfect addition to our list. We think it’s one of the best fantasy RPG board games you can buy right now.

How would you like to be the evil villain? The game allows one player to be the overlord, while the others work to defeat him.

As the heroes navigate their way through treacherous caves and dungeons, they must overcome cunning monsters and earn wealth in an attempt to thwart the vile plan of the evil overlord. Driven by an engaging storyline and ingenious character customization, Descent Journeys in the Dark transports you to a magical realm where you are the last line of defense.

With just five players, you and your friends can have hours of fun traversing the dungeons of Terrinoth.

3. Pathfinder Adventure Card Game: Rise of the Runelords Base Set

The next RPG board game on our list has earned its spot. Over the years, Pathfinder Adventure Card Game: Rise of the Runelords Base Set has consistently been one of the bestselling board games of recent memory.

Pathfinder Adventure Card Game: Rise of the Runelords Base Set
−$8.28 $51.71
Buy on Amazon

Set in the tranquil town of Sandpoint in the land of Varisia, you and your compatriates must traverse an environment beset by dark magic, giants, cults, and evil goblins. Set on destroying you and the innocent inhabitants of the town.

By working together, you and your friends must devise a strategy to circumvent the vile monsters and torturous magicians you’ll encounter.

Allowing up to four players, Pathfinder Adventure Card Game allows you to customize skills and equipment to explore toxic environments as you move through various scenarios.

Choose wisely, as characters grow stronger with experience, you’ll be able to upgrade and revamp skillset after every game to meet the growing imminent threat.

If you’ve been lucky enough to see all the movies of the Star Wars Franchise, then this next RPG board game should come as no surprise. Similar to a mini-movie, Star Wars: Imperial Assault is a perfect addition to this list as one of the best sci fi RPG board games on the market. 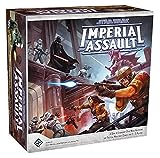 With an attention-grabbing storyline, incredibly intricate character evolution, and challenging level succession, Imperial Assualt offers up to two hours of play for five players. And we think it’s the best RPG board game for beginners right now.

Unlike most RPG board games that force players to work together to reach a common goal. Star Wars: Imperial Assault challenges that plot by pitting individuals against each other in opposing forces.

As a member of either the rebel or overlord forces, you must negotiate your way through 12 complex scenarios using tactical strategies. And since people of all ages love Star Wars, we think this is one of the best family RPG board games right now.

The detailed backstories of each figure allow you to get into character quickly. Not to mention, much like the movie franchise, familiar characters are intertwined throughout gameplay.

5. Mechs vs. Minions: League of Legends Board Game

Mechs vs. Minions: League of Legends Board Game
$139.98
Buy on Amazon

The teamwork aspect of Mechs vs. Minions makes it a worthwhile addition to our top 10 list. That’s why we think it’s one of the best RPG board games for couples who game together with other couples.

As a cooperative tabletop game, the central premise of this RPG board game is teamwork. Included with the game are intricately designed character pieces and accompanying storylines that allow you to jump right into battle.

As you and your fellow companions grow in power and experience, the minion armies will undoubtedly pose a more worrisome threat.

Guaranteed to keep you at the edge of your seat, the engaging gameplay and dynamic battle scenarios make Mechs vs. Minions a top choice. And we think it’s one of the best cooperative RPG board games for the money.

The next RPG board game on our list draws upon various elements of the game universe by involving elements of  RPG, deck building, and traditional board games.  WizKids Mage Knight Board Game: Ultimate Edition draws upon a rich history of gaming to bring you an impactful experience. 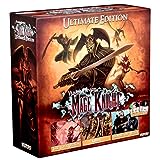 Similar to the original release, the Ultimate edition is suited ideally for individual players or groups of up to five.

Along with the initial experience brought to you by prior versions, WizKids Mage Knight Ultimate Edition features three new expansions (Lost Legion, Krang, and Shades of Tezla) and a complete board makeover for an immense action-packed experience.

An essential feature of the Mage Knight gameplay is freedom. Unlike most board games, Mage Knight allows players to act freely, even attacking fellow players.

There’s absolutely nothing stopping you from playing the evil villain or the powerful hero.

Cool Mini or Not’s Arcadia Quest Inferno Board Game is an immersive experience that features 12 new characters known as Heros. Players will choose from these 12 Heros to face 19 merciless monsters bent on their destruction.

As the game progresses, players get immersed in an underground inferno that offers power that glitters to the eye and punishments that are swift and painful for those who fail.

Arcadia Quest Inferno uses an all-out battle royal style. Not only will you be competing against friends, but you’ll have to contend with the environment as well.

You’ll enjoy hours of fighting powerful monsters, and sometimes even your friends may become foe. We think it’s one of the best RPG board games for adults right now.

Capable of entertaining up to four players, this RPG board game allows hours of thrilling gameplay action. What could be better than thwarting the evil plans of an Underlord in a city like Arcadia?

Along the lines of  Mechs vs. Minions, Darkest Night 2nd Edition is an RPG board game that thrives on teamwork — taking place in a rundown city controlled by an evil necromancer. You and your team serve as the last line of defense to save the city and its inhabitants.

As you navigate through the city, you and your fellow heroes have the opportunity to power-up and unearth valuable equipment.

A valuable addition to the gameplay is the ability to acquire abilities that help evade the daunting forces of the necromancer. Witty gamers may even use their newfound skills to search for mysterious artifacts and tools.

As the evil forces near, you must rally the troops and protect the monastery, because if it falls, you lose.

Suitable for up to four players, you and your team of heroes must protect the kingdom from the evil necromancer and his gruesome monsters.

9. Shadows of Brimstone: City of the Ancients

Shadows of Brimstone: City of the Ancients is a dungeon-crawl RPG, much like Descent Journeys in the Dark. A unique difference in Shadows of Brimstone is the old west setting.  Don’t be fooled; lurking in the western city is unspeakable evil.

Each player begins by creating a character, similar to old western movies. You can be the menacing gunslinger, the forceful sheriff, or even the saloon girl.

As you and your band of heroes traverse the terrain, you enter a dark mine filled with evil demons and goblins.  With the use of various cards and dice, players continually face new challenges.

Moving through the board allows each player to capitalize on the loot they’ve gathered. Sometimes you’ll even find yourself in another universe, dealing with new scenarios and evil monsters.

Capable of incorporating up to six players, Shadows of Brimstone provides tactical gameplay and action.

As evil encapsulates the land, the city dwellers need heroes. As the past warriors regain their might, the Ares Games Sword & Sorcery: Immortal Souls depicts the epic battle on the horizon.

The player setup of Sword & Sorcery is unlike most RPG board games. Each player must select an ancient warrior to subdue evil.

An exciting twist arises as you play. To regain strength, each player must gain power and skills to become an epic hero.

Sword & Sorcery comes equipped with an enthralling plot and epic character backstory. Immortal Souls does an excellent job of immersing each player into the action.

The gameplay itself is very intuitive; as you level up and unlock new character abilities, the journey becomes difficult.

An exciting addition in this RPG board game is the ability to re-spawn.  Every time an ancient hero succumbs to the powers of evil, they can now be reborn at an earlier checkpoint.

Be wary because if you die fighting the evil boss, you’ll have to travel from the beginning of the game.

Hopefully, our Top 10 list gave you some great insights into the nuances of RPG board games. There’s absolutely nothing like dominating your friends and saving civilization from impending doom.